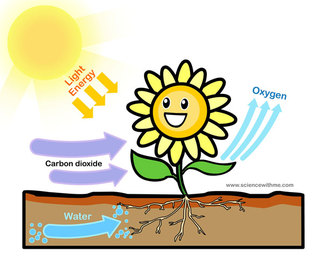 ·         Joseph Priestly: Candle with bell jar and mouse experiment – He concluded that air is necessary for the growth of a plant. He discovered the fact that plants restore oxygen in the air.

·         Jan Ingenhousz: Experiment with aquatic plant in light and dark – He concluded that sunlight is essential for plant processes that purify the air.

·         Cornelius van Niel: He did experiment with purple and green bacteria and demonstrated photosynthesis is a light dependent process with hydrogen from H2O reduces CO2 to carbohydrates. He concluded that oxygen comes from H2O, and not from CO2.  Finally, the correct equation for photosynthesis was discovered.
6CO2 + 12H2O C6H12O6 + 6H2O + 6O2

o   In chloroplast – the membrane system is responsible for trapping the light energy and also for the synthesis of  ATP and NADPH.   Where  stroma  has enzymes  for the reduction  of  CO2 in to carbohydrates (sugars )

·         Each PS has one specific chlorophyll – a, and many other accessory pigments bound by proteins.

·         It is the mechanism of ATP synthesis  in thylakoid of chloroplast.

·         When electrons are transported through the electron transport system (ETS) and protons accumulate inside the thylakoid membrane due to photolysis of water.


·         Now electrons are passed through PS and protons are transported across the membrane.

·         Occurs in plants like maize, sugarcane − plants adapted to dry tropical regions.  The leaves of C4 plants have Kranz anatomy. These plants show 2 types of photosynthetic cells , mesophyll cells and bundle sheath cells.  Chloroplasts are dimorphic i.e., those is the mesophyll cells are granal and in bundle sheath Cells  are agranal.

·         These compounds are transported to the bundle sheath cells. There, C4 acid breaks down to form C3 acid and CO2, and carbon dioxide enters the C3 cycle).

·         C3 acid, so formed, is again transported to the mesophyll cells and regenerated back into PEP.

·         C3 cycle cannot directly occur in the mesophyll cells of C4 plants because of the lack of the enzyme RuBisCO in these cells.

·         RuBisCO is found in abundance in the bundle sheath cells of C4 plants.

·         There is loss of photosynthetically fixed carbon and no energy rich compounds are formed, so photorespiration is a wasteful  process. 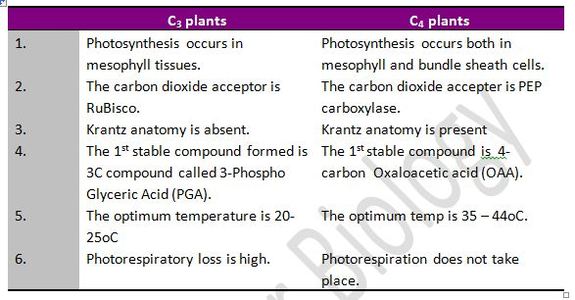 When a physiological process is controlled by a number of factors, the rate of reaction depends on the lowest factor, so the factor which is the least/ limiting will determine the rate of Photosynthesis.

Photosynthesis is influenced by internal (plant) factors and external factors.